Swiss-Czech workshop: students spent a week working on scenes from the centre of Prague, inspired by historical vedute

When the Department of Urban Design of the Faculty of Architecture of the CTU arranged cooperation on an international workshop with Momoyo Kaijima (ETH Zurich), the Czech heads were given the task of preparing historical Prague vedutas. The paintings of the old masters were to serve as inspiration for the students. However, the selection returned from Switzerland several times. Momoyo Kaijima still insisted on paintings populated by people and their activities. In fact, the week-long work was not so much about the exhibition facades of palaces. The students concentrated on the events taking place in the environment. They were then able to record the differences between day and night, as well as festivities hundreds of years old, in a single drawing. 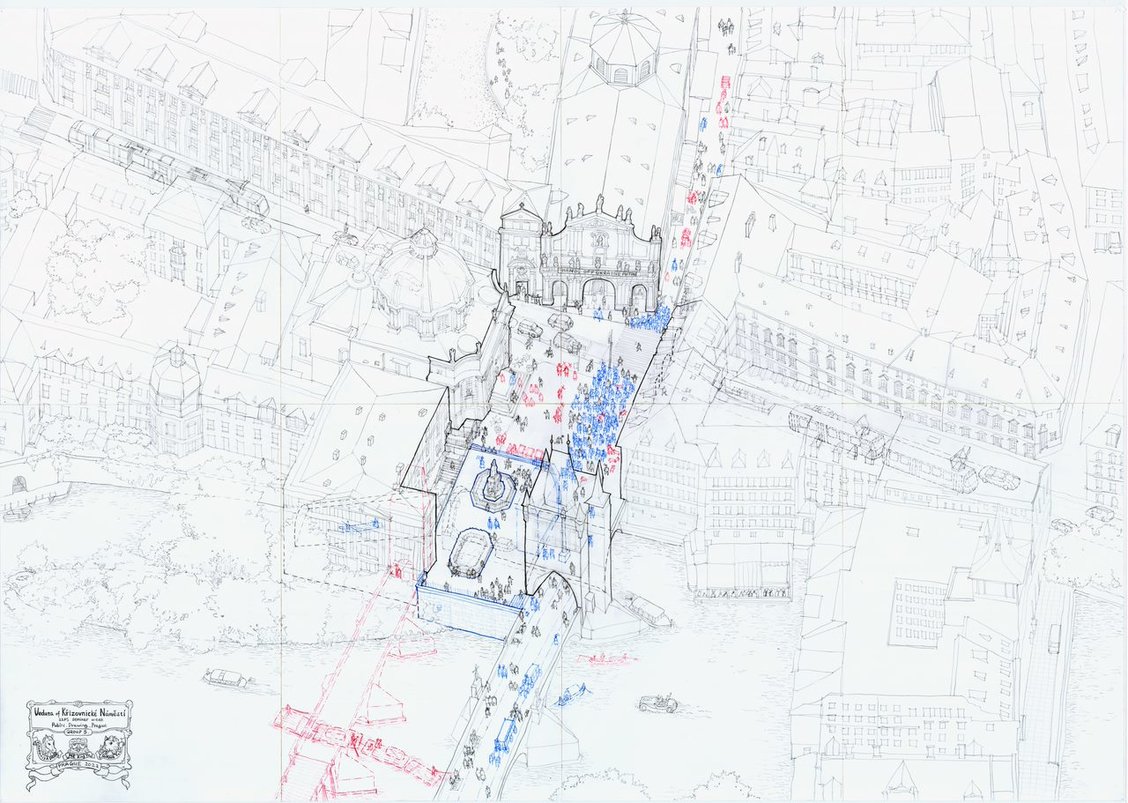 Momoyo Kaijima of Bow-Wow Studio has been studying the chaotic movement of metropolises for 20 years. Her careful observation and detailed hand-drawing first attracted attention after the publication of Made in Tokyo in 2001. Detailed depictions of overlooked places such as food stalls and expressway intersections help to break down preconceived notions about architecture. In fact, Momoyo Kaijima's challenging and meditative work mainly observes public space and the lives of people around houses.

In March, students of the Faculty of Architecture of CTU had the opportunity to work in teams with their Swiss colleagues from ETH Zurich, where Momoyo Kaijima is currently based. Each group chose one of the locations in the centre of Prague and went to observe the activities of people in the area. The large-scale axonometries that were produced during the week also served as a platform for discussion. We asked Štěpán Macek and Mária Jacová about their experiences.

You have been watching all week what has been going on in the historic center. How did you perceive the decline of locals in the centre of the metropolis?

Mária: We drew the Fruit Market, where vegetables and fruits were actually sold in the past. It was not sold in stalls, but on unfolded tarpaulins forming a colourful carpet. It was always busy. Nowadays it is the other way round, only the shops and the Estates Theatre are open, otherwise not many people walk around the square.

Štěpán: Tourism was certainly one of the main topics of discussion and it appears in the drawings. We tried to represent different layers or activities and these happen at different times. In one segment of the veduta, a peak time of day was shown, in another a significant historical event. We worked on Shooting Island and were surprised to see that the first Sokol gathering and the May Day celebration took place on the local lawn. And we know from the plays of Jára Cimrman that Emperor Franz Joseph I walked on the bridge here. We searched for symbols in old photographs - for example, for May Day 1890 it was hats and flags.

You can also hide various jokes in the drawings. I was intrigued by an old newspaper report about a heavy car that rocked a chain bridge. I did not know how to capture the situation, so I put an elephant on the back of the truck. But you can also find a shark in the Vltava or a jumping monkey. 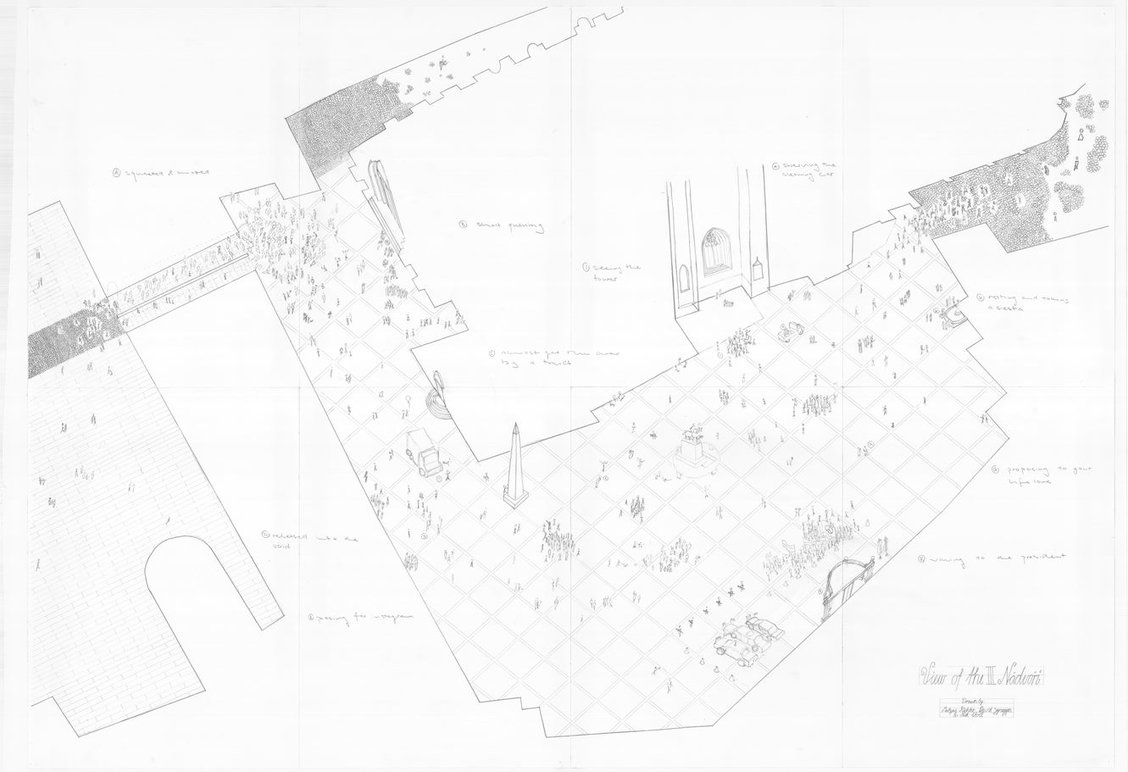 Experienced architects often criticize the current teaching in faculties, which has moved directly into the virtual environment of programs. Was six days of pencil drawing an intense experience?

Mária: I felt good about drawing after my first year at school, but I miss it in the studios when you are already chained to the computer. I think the workshop brought together people who are more in touch with the pencil, but it was not just about free drawing.

Štěpán: It was also descriptive geometry. At a certain stage we had to choose the projection method and the point of view. We used a ruler on the main objects to lay out how tall to make the people, how wide to make the sidewalk. And then we worked proportionally. Some of the groups used the available 3D model of Prague, and we printed the views from that and drew over the glass to create the drawing.

I may ask ignorantly, but do your axonometries retain scale?

Mária: Yes, we should have worked between scales 1:200 and 1:800, but we would have had to justify that, the little man becomes a dot and the activities are hard to represent. We were the only ones who chose the view from below, we did not look at the square from a bird's eye view, because we wanted to highlight Prague's passages, otherwise hidden in buildings. 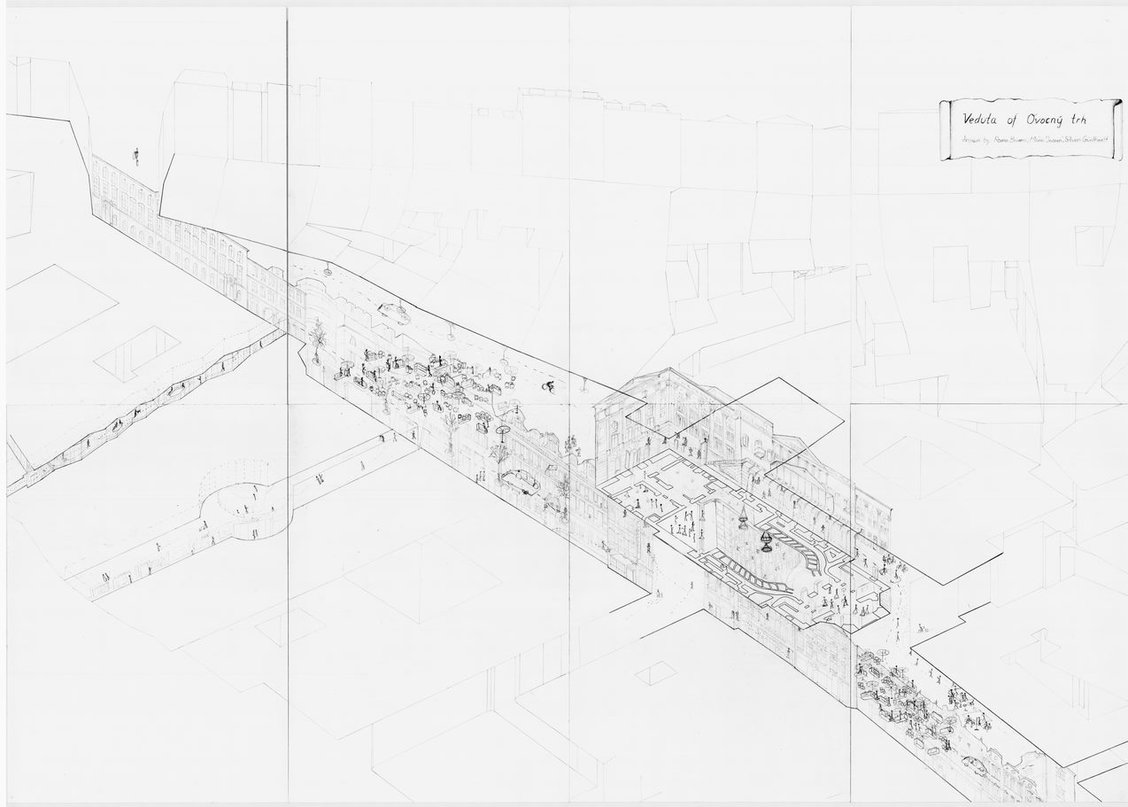 How did the consultations go?

Štěpán: The Swiss team of teachers went around the streets several times - they were always on time everywhere with their legendary punctuality. We dealt with practical things - like choosing the angle of the shot and how to show the informality of the space or the penetration of nature into the city.

Hope you will not miss a week of school

Štěpán: We will have to catch up on our studies, but the Swiss have a week set aside for the workshop. The choice of events is varied and all over Europe. So they can try almost any activity and not miss a thing.

Can you use the experience in your practice?

Mária: Axonometry is not subject to distortion like perspective, it just needs to follow one rule. It is thus a good intermediate between the admittedly illustrative but demanding visualizations and the floor plan, which the average layperson may not understand as much. We apply them mainly when showing features in a design.

Štěpán: It was an intense job, where we had to tear off every balustrade on the bridge and the hat of the little man. But it was also meditation and time to think about things. Communication with the lecturers was very informal, the Swiss prefer to have a debate with an aperol in hand at every opportunity. Teamwork was also key, as we gradually entered into our drawings. We also started to work more consciously with the structure of the line or the strength of the pressure on the pencil.

The interview was published in the magazine Stavba 2/2022, conducted by Pavel Fuchs